Fashion. Sports. Politics. These aren't colleagues frequently seen partying together. Typically thought of as isolated to their own domains, I saw the convergence of these fields at the same time and in the same space, shared by representatives of the entire world. What is more, the Olympics Opening Ceremony is a microcosm of sociopolitical dynamisms in the global community. In other words, the Olympics showcases the trends--norms, what is acceptable, global relationships--of the times and, while overtly focusing on the art of athleticism and competition, is of much greater salience and importance in regards to its more covert or ancillary messages.

My perception is that the typical individual in the United States is interested in what he or she is interested in and has limited exposure to information outside of a few specific areas. Interests are probably clustered based on demographics to some extent. However, for Kim Kardashian to have over 15.5 million followers on Twitter and the United Nations to have less than 1 million followers, I'm assuming that this interest in pop culture and neglect of a wider world culture probably spans multiple demographics. How frequently is someone who just bought a jersey for his or her favorite sport team aware of the trends from the most recent fashion week as well as each's economic impact? How frequently is someone who considers fashion to be hobby aware of and involved in local, state, or federal government and policies? How many people who watch the Olympics consciously think about its significance as the only ongoing international event without a political purpose that encourages cooperation and respect, defining the global community in a way unlike anything else? The Olympics is a phenomenal opportunity to take a more holistic perspective at the "working" of the world.

Why does a holistic perspective of the working of the world matter? I once told someone I was dating that I have a fashion & lifestyle blog. He made a comment that judged anyone who is interested in fashion as superficial and not interested in the welfare of others. Generally, that may be true; The Devil Wears Prada might be stereotypical, but it may also originate from a grain of truth. However, fashion and altruism don't have to be mutually exclusive. Being aware of broader issues and global trends as well as developing the skills to interact in a global community is part of the grooming necessary for pursuing a role with a greater purpose and being successful in that role--however you define success. This awareness and these skills are necessary in any discipline or area of interest. 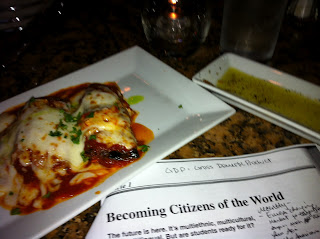 Some people may not respect high fashion as worthy of an investment of time or resources, let alone appreciate it as an art. However, fashion can't be ignored as having an economic impact, which ushers it into the sociopolitical arena. Whether it's the designers or fashions donned by Michelle Obama, the Queen, or Kate Middleton--J. Mendel, peach pleats, and Christopher Kane--or the widespread attention to Ralph Lauren's uniforms due to being manufactured in China, the overlap of politics and fashion at the Olympics is a relevant and visible example of the interactions among different arenas and the global community.

The dearth of jobs available, outsourcing, and poor economy are arguably the focus of the upcoming U.S. presidential election. Ralph Lauren's decision to manufacture the Olympic uniforms overseas is consistent with general practices in the Unites States. However, it has definitely created an uproar. Maybe this was perfect timing. Maybe this will incite a change. Hopefully, designers and manufacturers will learn from this. Maybe the United States needed a wake-up call on an international stage to slap us in the face.

Ralph Lauren has contributed much by way of philanthropic activities throughout his career. RL's decision to manufacture clothes in China is common in the United States; it could be expected. There is a difference between expectations, what we think will happen, and standards, what we think should happen. Frequently, people confuse them, which can lead to great discontent. Ralph Lauren's overseas manufacturing should have been expected considering the current widespread practices in the United States. However, this does not change the standard--a standard that may have been forgotten or pushed aside. Sometimes, there seems to be a great disparity in the U.S. between what is commonly practiced and what our standards are. Is our standard to be current on the whereabouts of Kim Kardashian and ignorant to sociopolitical happenings?

Regardless of your interests or career field, you play a role in something larger. Find that connection and educate yourself--be aware. Recognize common practice, and compare it to standards. There is always the opportunity for learning and acting responsively and responsibly in any domain: fashion, sports, politics, or other.
Email ThisBlogThis!Share to TwitterShare to FacebookShare to Pinterest
Labels: Ermanno Scervino, ethics, fashion, olympics, politics, society, sports, travel