How it happened
I'm sure you've seen Juicy Couture's fall/winter campaign, with traditional colors and plaid punctuated with brights. (Below, I've included a few images and items that give an idea of this look.) A few months ago, I spied the perfect plaid mini from Abercrombie. I waited dutifully (and anxiously) for it to go on sale, and I scooped up this find at $30 compared to an original $80; it now has a home in my closet! (There's also a picture of it below.)

Just having bought a bunch of nail polishes and wanting to use them all, I decided to use Juicy's campaign and my plaid skirt as inspiration for creating a design that used as many of my new polishes as possible.


Plaid seemed to be the perfect way to go, especially since I could use a variety of colors. (At some point I will post the outfit I wore, centered around the plaid skirt and jiving with my nails. I was pretty excited!)

Here is Designer...De Better! from OPI's most recent Muppet collection. I am so in love with this polish! Although it has a somewhere-between-gunmetal-and-silver foil base, there are eensy-teensy specks of copper! Of course, this adds to the overall effect of the polish, but you can really only appreciate this detail up close and personal.

I used striper polishes to create almost all of the lines. Since the OPI polish doesn't have a striper brush (long thin brush used to create lines), I used nail polish remover on a striper brush from another bottle. I did this with the Sinful color below as well, since it also isn't equipped with a striper brush. (If you do this, just be sure to put something over the mouth of the polish bottle from which you borrowed so it's not exposed excessively to air.)

This shade is Winterberry from a current Sinful Colors line. It's slightly metallic and is a very unique, muted blue-hued purple polish with gray undertones. Since the above picture is taken from slightly further away, the plaid has a different look; you get a better idea of its overall impact instead of being distracted by the details. 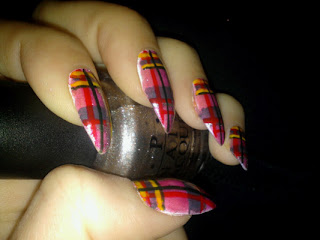 One of my favorite aspects of this design is that you get a completely different visual depending on which side of my hand/nails that you see. In the above picture, the pink, red, and purple stand out; in the below picture, the yellow and green are prominent. 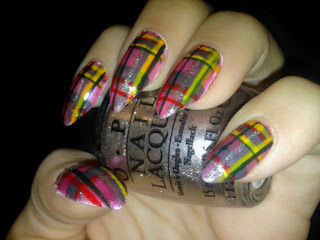 The pink base color is Hedy's Ma.nish.ma Holographic Nail Color in Way Out Fuscia. It's not actually holographic, but it packs a lot of punch. It's extremely close to OPI Designer Series' Sensation (DS 013)﻿.
I was very pleased (okay, ecstatic!) with the result of my first attempt at plaid nails, as well as pleased with the color and design that was my birthchild of two sources of inspiration.  I normally wouldn't put such 8-crayon-box colors (the red, yellow, and green) with a crazy pink or unique purple, but I think it works in a surprising and novel way. I'm not used to working with striper brushes, but they make straight-line designs worlds easier! In case you are wondering, these are my real nails (minus my pinky, she had an accident :/ ), and I have them shaped in an almond-stiletto style.
Email ThisBlogThis!Share to TwitterShare to FacebookShare to Pinterest
Labels: Abercrombie, Designer DeBetter, Juicy Couture, Nail Art, Plaid Nails